My oldest son, a college freshman, recently came home on a “forgot and restock” trip. In other words he needed to gather some things that he forgot on move-in day and restock his food supply, which as any parent knows, is high priority to most eighteen-year-olds.

Over the weekend, our family enjoyed hearing about him forging new friendships with roommates, suitemates and classmates. We learned that with a little foresight, one could find a lot of free food the first week of class…lemonade on the lawn, cupcakes at the Student Union and late-night popcorn and drinks at his dorm.   We heard about how much he really liked all of his classes, especially the one taught by a professor who has a great fondness for Hawaiian shirts. And yes, our college freshman celebrates wearing a sweater, jeans and Birkenstocks to class in the mornings after his morning cup of hot tea. It sounded like he is transitioning just fine.

Yet I was most drawn to the discussion about his Freshman Seminar class, The Happiness Project, based on the book of the same name by Gretchen Rubin. It is a book about its author realizing that time passes much too fast and that she was not spending enough time on those things that truly matter in life, those things that made her happy. Thus began her year long “Happiness Project.” 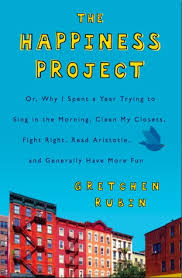 It was just a day after my son returned to school that he texted me appealing for some help on an assignment for his Happiness Project Seminar.

“I need you to tell me some more stories about how Poppy helped people,” he wrote. Even though he had been a recipient of my father’s affection since his birth, my son didn’t know just how much my father did for others until I shared a few stories at his funeral.

“Poppy is going to be the focus of my Happiness Project,” he texted.

I wanted to tell him that Poppy didn’t share those stories often. Sharing the stories didn’t make him happy. Creating them did.

My father was born into the Great Depression and lived his 79 years knowing the difference between a want and a need.   He needed to work at an early age and never held his own diploma in his hands, just those of his daughters’. Yet one did not have to know him for long to know that my dad was a well-educated man.   Those hours spent reading newspapers, chatting in the offices of bank presidents, and even playing cards with buddies in the back room of the back road gas station, schooled him more than most classes could.

Eventually, he met my mother and together they saved and over the years invested in several rental properties, which I believe gave birth to my father’s own Happiness Project.

Life was not always so happy. Remember that he was born during a dark time in history. Perhaps the hard life he was born into left an indelible mark on his heart. He was always drawn to people who were unemployed, under the weather, or even living under a bridge. Not all of his renters would fit into these categories, but those who did never forgot him.

One of my father’s favorite things to do each Friday was “collecting.” More important than just collecting rent money, he collected stories, often over a cup of coffee or a “pop,” his 1950’s lingo for Coke. He was a good listener. After retirement, he even stopped wearing a watch. Watches did not make him happy.

During such a day “collecting” he heard about a man sleeping in his truck under a bridge just outside of town.   A part-time job wasn’t enough to pay rent AND food. My dad found him, gave him a roof and a car and eventually helped him land a good job that allowed him to buy that same roof and car for himself. His path in life only got better and he never forgot the open hands my father extended. He and his family often visited my parents and they became fast friends. That friendship made my dad happy.

Daddy also provided homes for single moms, the aged and disabled, the addicted and some who just needed a break when it seemed one could not be found. Children especially tugged on his heartstrings. He once gave an old mobile home to a family whose little girl was sleeping on a mattress on the floor under a leaky roof. With some help from some kind souls in the community who cleaned, repaired and painted, that old mobile home, complete with a new pink bedroom, turned renters into first-time homeowners.

My father often wheeled-and-dealed for appliances, air conditioners, and even a good used car or two when those who rented from him needed something. Food was no exception. He frequented a local grocery store and sometimes emptied their shelves of the dented canned vegetables, slightly crushed boxes of cereal, and anything red-stickered, overstocked, or buy-one-get-one-free.   In Santa-like fashion he delivered groceries when he knew pantries were empty. He went by the grocery store so often in fact, that he knew the store managers and checkout clerks by name. They even called the house once to check on him after a long, unexpected hospitalization. His first trip out of the hospital? Yes, indeed…..a trip to the grocery store to fill a bag for a couple whose story he knew well.   Those dented boxes of cereal made him happy.

There are many more stories that I saw in living color as I was growing up, others that were told to me by my mother, and still others shared by some of those lucky people who crossed paths with my father when they needed help the most.

However, the best stories were those told to me by the man himself. They weren’t glorious stories told to lift him up or to shine a bright light on a halo. He already knew what author Gretchen Rubin summed up in her book, “the days are long, but the years are short.” He knew what made him happy.

And on one particular long day as he lay in bed, weakened to just the bones that cradled that big heart of his, I curled up beside him and became five years old again. “Daddy, is there anything that you haven’t done that you wished you had?” I asked, using moments like this to ask those questions that were slipping like sand through an hourglass.

“I wished I had more time with the grandkids.”

Long, silent, breath-holding pause. His eyes focused on something above that I couldn’t yet see. Then he handed me the baton.

“And I wished I had more time to help people.”

My father’s very own Happiness Project was handed to me swiftly, quietly, powerfully. It might as well have been wrapped up and handed to me with a bow.

He simply wanted more time on earth to help people. In helping others, he found that which made him happy.

A year after his passing, I am still holding that baton. It would be simple to put it down or hand it off to someone else. But I want to hold it a while and feel its weight in my hands.

I picked up a copy of Rubin’s The Happiness Project at the library yesterday. I can’t wait to find a quiet space to learn to map out my own happiness in this gift of a life. I can’t wait to talk to my son about the book over his fall break when he is once again at home sitting at our dinner table. I can’t wait to share with him that I believe a piece of Poppy’s happiness just might be what makes us happy too.

For now, this day, I’m learning to twirl a baton.