I have always loved the month of September. It is the month of my husband’s birth and the month I birthed four of our seven children into this world. September often holds on to the lightening bugs of summer while it ushers in the sweater-like days of football tailgates. It simply is the best month of the year.

Perhaps it was not by chance that my father’s time on this earth gently passed on a beautiful Saturday afternoon last September. I remember the day well. I remember the sunshine on my face as my family picnicked outside the Hospice home at noontime. I remember the Butterfly Bushes being tickled by yellow-tailed butterflies outside his room window. I remember the feeling of just the four of us…. Daddy, Mama, and my sister, Christine, and I….perhaps the only time since I was a little girl that just the four of us were in a room together. There were stories. There were tears. There was laughter. There was silence. My dad could not have chosen a more perfectly created day to take his last breath.

September changed me on that 3rd day of the 9th month, yet my true epiphany came a little later….

There really are stages to grief and mine was no exception. I spent countless moments just trying to find tangible pieces of him following his passing. I simply wanted something, anything really, to hold in my hands. I kept coming back to a photograph that my son had taken of my dad driving the red tractor on our farm. It is a rearview picture of sorts. One cannot see his face, only the back of Daddy’s plaid shirt and floppy hat. The tractor carried him through the green grass–lined dirt road toward the fields, a favorite of his, second only to time with his grandchildren. 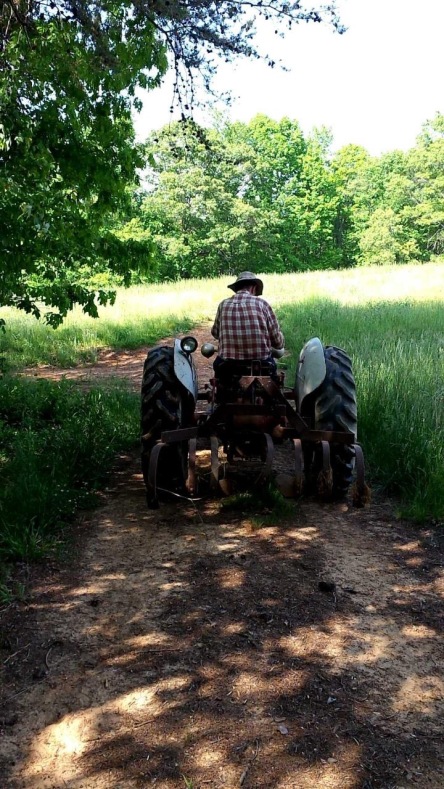 Gasp!  There it was, THE shirt! Cotton flannel. Shades of deep burgundy, grays and whites. A shirt that I had been long familiar.  It flooded my memories of him working on the tractor, plowing a field, or picking okra and tomatoes in the garden. When not on his back, it found its home in the front seat of his truck. I wanted it…to touch it, to smell it, to hold it close to my heart.

So when I stopped by my parent’s house one afternoon, which had been harder with an empty recliner greeting me each visit, I asked my mom if she had seen the shirt while cleaning out some of my dad’s things. “That old shirt in his truck?” she asked with a tone that really said “You can’t be serious?” YES THAT SHIRT! There was silence in the answer. She quietly opened the door to the garage and led me to a small cardboard box waiting for me in the corner. It was filled with things she had cleaned out of his old truck….faded grocery store receipts, rusted nuts, bolts and tools, playing cards and empty wrappers from Nabs crackers and Wrigley’s gum. She pulled the discarded items out piece by piece until she unearthed a hardened wad of plaid that I immediately knew to be my treasure, my epiphany.

My mother handed the shirt to me and I carefully unwrapped it from itself. It was not the rich-colored shirt that I had remembered. It was even better! It was crusty and smelled of red dirt, sweat and hints of gasoline and oil. Sun-faded on the backside, it told a story of the countless hours Daddy spent on a tractor, in a field, or under a truck or kitchen sink. Best of all, it had a few rips on the front side that were carefully button-holed with gray duct tape. I had imagined that holding the shirt in my hands would unleash tears and grief unrecognized, but instead I surprisingly found myself laughing out loud while I ran my fingers across the duct-taped, patched handiwork of my father.

The shirt represented, in all of its wonder, a man who lived a life of hard work and simple living. “Why throw away a perfectly good shirt?” I heard him say on more than one occasion, not really a question, more of a statement.   His closet was full, yet he often wore old workshirts and socks well beyond holes and rips.  They represented the richness of those dirt roads that both he and I were both born into and on which my family still runs barefoot. The shirt reminded me that “new” is not always better. Mostly it took me back to a September afternoon and the rawness, expectation, and beauty of life’s changing seasons.

THE shirt was a piece of my dad that I could hold, and somehow in holding it, my healing began.

September is still my favorite month.