If my grandmother had had her way, my name would have been Allison Beth. Allison is still a question mark to me, but Beth was most certainly a way to carry on her legacy long after Elsie Elizabeth was gone.

Yet when it came time to name their daughter, my mom and dad had dreams of their own. Boy or girl, I was going to be the namesake of my father, whose name was neither Allison nor Beth. I can only assume his father was an avid fan of baseball because my dad was named after Dizzy Dean, a pitcher for St. Louis in the 1930’s, and Dean’s brother, Paul, who also pitched for the team.

And so Paula Dawn was written in the summer stars of 1971.

I am my father’s daughter.

And he was the best dad. Even though I have no memory of all those naps where the sound of his heartbeat put me to sleep, I have a photo album that tells me the story. 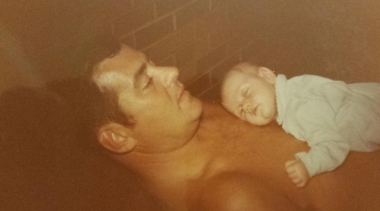 He changed his work schedule to be able to stay at home when I got off the school bus each afternoon. He was at home to make eggs, sunny-side-up, and watch the Price Is Right when I was sick. I still remember the 3rd grade fieldtrip that he chaperoned at the park down the road…the only dad in the bunch. Funny the things that stand out in the memory of your 8-year-old self.

He never refused me when I wanted to tag along to mow a yard, play cards, or join him for Friday night BINGO at the American Legion. There were more than enough life lessons in every hand dealt out, and I am better for every one.

I have carried his name proudly all my days. Even when the heartstrings of marriage had me considering a new name, I held fast to my own. How could I ever let it go?

Names are indeed important to me and my husband. When our firstborn was preparing to make his debut, we both had a lot of ideas about his name. After listening to me popcorning every family name combo I could think of, my husband popcorned his own question.

“Remember how important it was for you to keep your maiden name when we got married?”

“Then you’ll understand how important it is to me that our son have my name.”

And so Omnie IV was warmly welcomed into the world by two of the three Omnie’s that preceded him.

Our girls each carry special family names from all branches of our family tree too. The names of our mothers, grandmothers, and sisters often echo from our backyard.

But when it came time to announce the pending arrival of our last child, there was never a question about what we would call him. His name had lain fallow in the fields of my heart since I was a little girl.

This child was quite the surprise and even though our hearts were overjoyed, we were filled with dread just thinking about telling our parents. Big families just aren’t what they used to be.

We live in a small house. We would need a bigger vehicle. Then what about money, time, and college? My husband and I rehearsed the day like a Jeopardy Championship depended on it.

But we come from smart stock, and the grandparents knew why we were there from the moment they saw us standing at their doorsteps. We’d been down this road before.  So we answered a few questions, watched heads nod, and welcomed the hugs that were gifted to us in celebration of a new life.

Yet my father’s reaction surprised us most. Upon hearing that our seventh child was expected that fall, he simply leaned forward in the kitchen chair and smiled. He laughed out loud.  He was giddy. He hugged me a little longer than usual. And he spoke straight to my heart when he said “I can’t wait to spoil him rotten.”

I believed every word.

Dean Paul, Paul Dean’s namesake, was born that September, just two short years before my dad passed away.  I still remember the call I made from our hospital room to share the news that another generation would share our name too.

Dean Paul was indeed spoiled rotten. Daddy held him every chance he got. Dean was toted, and coddled, and frequently took naps on Daddy’s chest. He would cry whenever I took him from the arms that held him tight.

I knew how it felt.

This all leads me to an early Ash Wednesday morning a few weeks ago. I stopped by the grocery store before work to pick up a few things. It was a particularly quiet morning and I was enjoying checking off my To-Do list so early in the day. I pushed the cart up to the checkout counter and politely said “Good Morning” to the Assistant Manager who walked over to ring up my items. She scanned my rewards card, bagged my groceries, and kindly avoided the routine chit-chat, like she could sense that I had just survived the frenzy of the weekday school morning rush and needed a few minutes of peace.  She read me well.

Without looking up while bagging the last few items, she broke the silence.

“I really miss your dad.”

The silence stopped right there.

The words sounded much louder in my head.

After walking out for the sunshine to warm the tears on my face, it occurred to me that she had known my name because she first knew his.

I considered it an honor.

For me Ash Wednesday always serves as a reminder that we will all ultimately return back to the earth, yet our names will remain long after we are gone. Some of my favorite names are written in books and letters. Others are carved in trees and colored on arms. Yet more are forever remembered in song.

And some names still enjoy the quiet of the early morning, even if it is on Aisle 3.

So this Easter may we all visit the names written in stone, both near and far, and be forever thankful that our story continues on.